Cycling biomechanics represents a complex interaction between rider and cycle (Man-and-Machine). Research clearly demonstrates that Body-Position (Bike Fit) impacts on cycling comfort, performance, and injury. The Bike-Fitter should consider both Intrinsic (related to Man) and Extrinsic (related to Cycle setup) risk factors when fitting. Failure to do so will undoubtedly compromise the outcome and effectiveness of the Bike Fit. 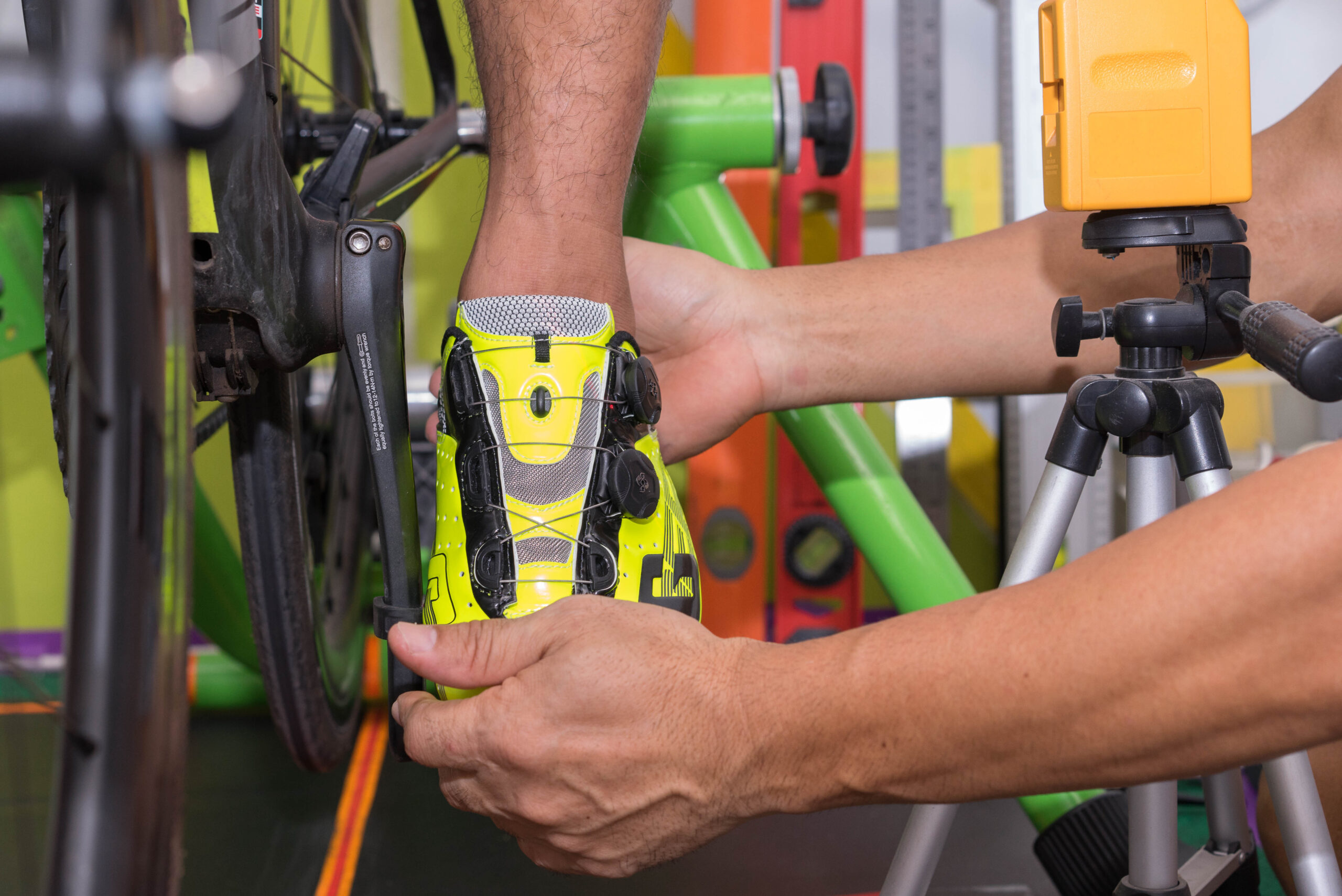 Efficient, injury free cycling requires perfect harmony between man-and-machine (1). Harmony is achieved through proper set-up parameters (Bike Fit) at the three-contact points i.e., saddle, pedals, and handlebars (2). Just as cycles are designed to be discipline-specific (e.g., mountain-bike, road bike, and triathlon bike) it follows that cyclists should adopt discipline-specific body positions for given cycling demands (3, 4, 11). Harmony can be disrupted by anatomical, biomechanical, or mechanical factors. Therefore, a multidisciplinary approach which involves sports science and sports medicine is necessary (5, 6). The above rationale fully endorses our unique 3-Step Integrated BIKEFIT-PACKAGE process.

From the conception of the bicycle in the 1900th century, all cyclists, to a greater or lesser extent, have relied on a three point contact i.e., saddle, pedals, and handlebars. Optimal positioning (bike fitting) involves the manipulation of these three points of contact in relation to each other. This aims to achieve discipline-specific improvements in pedalling efficiency, aerodynamics, balance, injury prevention, steering, traction, manoeuvrability, vision and comfort. The most frequently suggested strategy to reduce injuries is to optimise body position (7). This is normally achieved by adjusting the bicycle configuration at the three contact points, so as to fit the cyclist’s anthropometry (8). 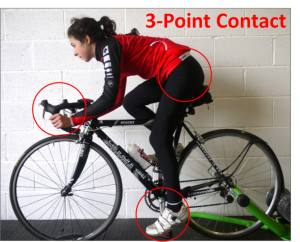 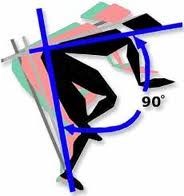 Efficient interaction between the rider and the cycle is of primary importance in maximising cycling performance (9). As such, cycle set-up and body position should be discipline-specific to reflect the demands of the chosen cycling discipline and rider objectives (10). Essentially, most cycling disciplines can fit into one of 3 classic body positions (3), namely, i) Recreational and commuting position; ii) Road race cyclists and sportive riders; iii) Road triathlon / aero position. Although the above represent classic positions, they frequently overlap and form a continuum (11).

The foot/pedal interface has been described as biomechanically complex (8), controversial (12), and in some cases, the cornerstone of effective bike fitting. Its role is to transfer forces efficiently, and to dissipate deleterious forces at source, rather than, allow them to ascend the kinetic chain, and cause injury (13). Injury has been linked to shoe design (12, 14), a pedal width stance, that is either too wide or too narrow (12), incorrect cleat position (15), insufficient rotational float (8, 16), too much float (12), abnormal foot biomechanics (17, 18, 19) and leg length differences (10, 12).

The position of the cleat, in relation to the shoe, can be adjusted in five different planes of movement (20). Changes in the fore/aft cleat position do not appear to have any significant effects on knee joint forces, muscle activity, pedal forces, or oxygen uptake (8). Although there is no scientific evidence for an optimal fore/aft cleat position, there are recommended variations. Pruitt (1) recommends that the 1st metatarsal head should be directly over the pedal spindle. Sanderson et al (21) recommends that the 5th metatarsal is directly over pedal spindle, whilst Burt (12) suggests a compromise, somewhere, between the two. Insufficient rotational float at the foot / pedal interface has been linked to increased risk of knee injury (22), and riders who exhibit subtalar pronation require more rotational float (16). The theory is that extra float is required to accommodate abduction of the foot, when it pronates under load, on the pedal downstroke. As the cyclist pushes down, the tibia rotates internally causing the foot to roll inwards (i.e. pronate) and the knee can be seen to adduct, and move closer to the bicycle (18). A practical diagnostic clue is to observe the foot as it approaches the bottom of the pedal stroke. If excessive pronation exists, the forefoot will abduct (toe-out) – and the heel will move inwards, towards the crank arm (20). Ruby and Hull (16) found that 1 degree of rotational float decreases knee-joint loads significantly. In support of Ruby and Hull’s findings, Burt (12) observed a sudden epidemic of knee pain in some Team Sky and British Cycling riders. Investigations revealed that they were all riding a new brand of pedal and most interestingly, the amount of spring tension had been increased, thus effectively restricting the amount of float.

Pronation increases tissue stresses at the knee – potentially leading to overuse injury (18). During one hour of cycling, a cyclist may average up to 6,000 pedal revolutions and so the smallest amount of misalignment at the foot/pedal interface, whether anatomic, biomechanical, or mechanically related – can lead to discomfort, injury and impaired performance (15, 20). Although the level has since been disputed (12), foot misalignment (forefoot tilt) within cyclists has been found to be >85% (23). Refer to image of Matt Bottrill’s excessive forefoot misalignment tilt directly below. 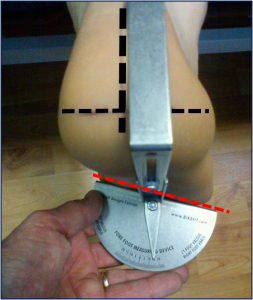 The saddle can be manipulated in the vertical and horizontal plane, and tilted nose-up or nose-down, in the sagittal plane. Through manipulation and choice of saddle design, we can influence comfort, injury, and performance. 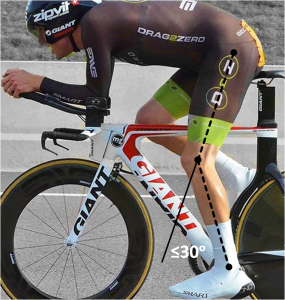 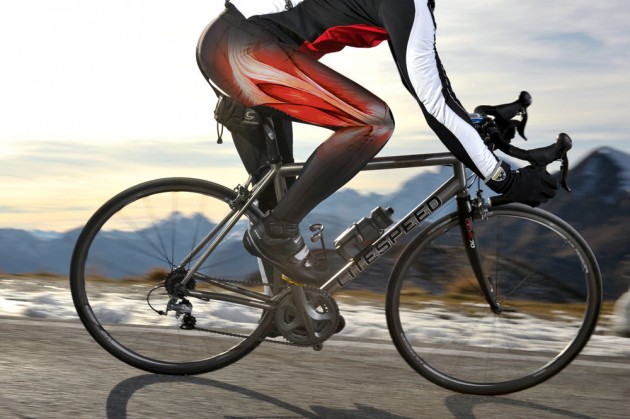 Saddle height is the Holy Grail for power output (12). The effect of saddle height on performance and injury prevention is arguably the most fundamental adjustment in bike fitting (24, 25, 26, 27). Changes in saddle height have been shown to affect knee angle, muscle activation, muscle length and impact on oxygen uptake (8). Studies have found that a 3% increase in saddle height resulted in 7% increase in force effectiveness. A low saddle height has been linked with anterior knee pain by increasing the force between the patella and intercondylar groove of the femur cartilage (28, 29). This force is at its greatest when going over top-dead-centre of the pedal stroke, when the knee is at its most flexed position (12). The consensus of scientific studies recommends an optimum saddle height for trained and untrained cyclists of 25º-35º knee angle, for both injury prevention, and improving performance (24, 25, 26, 27).

The conventional saddle should be set horizontal, or with a slight tilt (±3º), using a spirit level (2). Tilting the saddle rotates the pelvis providing there are no intrinsic muscle restrictions to cause its blocking. An improper saddle tilt has been known to predispose riders to low back pain (30, 31), increased perineum saddle pressures (32) and hand problems (33). For example, a nose-down saddle tends to rotate the pelvis forward and redistribute the body weight by moving it forwards. This redistribution in body weight can lead to compression of the ulnar and median nerve (34).

Saddle design has been linked with pain and urogenital symptoms in the perineum region (35). Complaints associated with increased saddle pressures are common in both male (32) and female cyclists (36). A review of 62 pertinent articles found urogenital complaints in 50-91% of all cyclists (37). 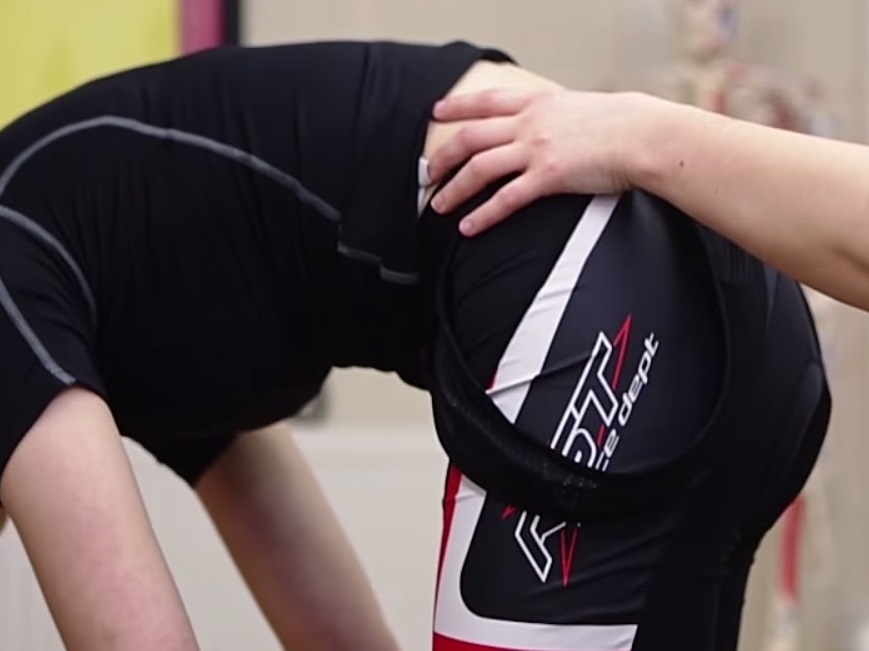 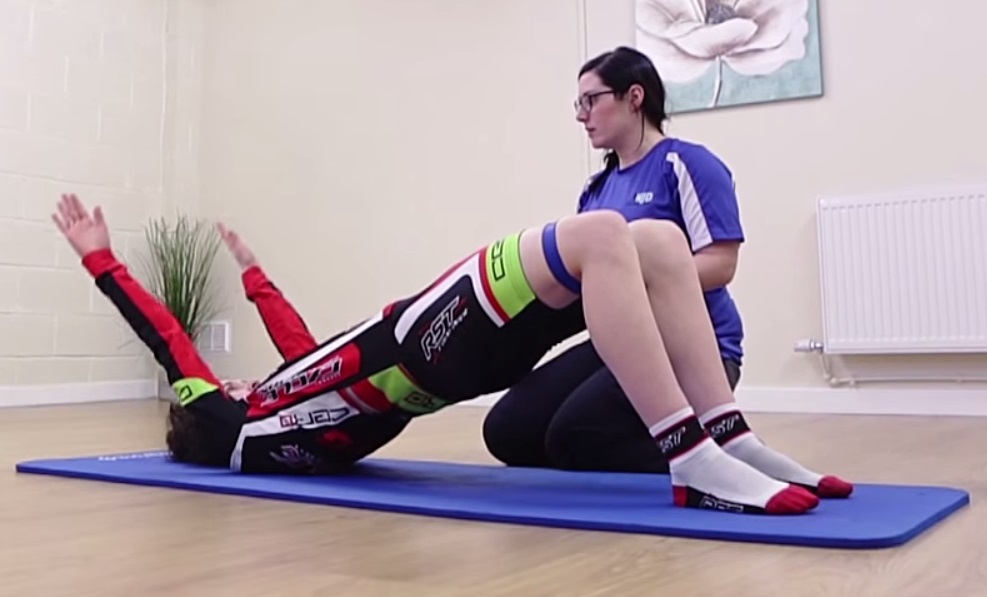 The primary role of the handlebar is to steer the bicycle and to facilitate safe and effective manoeuvrability. A recent adjunct to this role is an aerodynamic body position using aerobars. The first handlebars, used in the 1880s, were made from solid steel bar. In the 1930s, they progressed to steel tubing, for lightness. The first aluminium tube handlebars were introduced in 1963, by Cinelli. Handlebar design, hand position and height can be manipulated to improve aerodynamics, comfort, vision, manoeuvrability, and stability. An incorrect handlebar position, usually one that is too low, has been reported to cause pain and injury in the hand, wrist, shoulder, neck, lower back, and perineum (28).

Research studies have demonstrated that modern float pedal systems have the potential to reduce undesirable knee stresses associated with overuse knee injuries. Despite the use of modern-day clipless pedal systems, overuse knee remains arguably the most common cycling injury, affecting an estimated 40% to 60% of all regular cyclists. However, the introduction of rotational float found in modern clipless systems facilitates a more linear knee motion resulting in lower incidence levels.

In 1984, the French-based ski binding manufacturer (Look) first tested a rigid float-less clipless pedal with the help of professional cyclist Bernard Hinault. This clipless system was introduced to the market in 1986. However, this rigid float-less system placed undesirable stress on the knees and as a result the incidence of knee injuries escalated. In 1987, Jean Beyl invented the Time pedal system, known as Bio performance. This design provided free rotational float with some lateral motion. At first the Bio performance system received much criticism from competing pedal manufactures. However the alleged claims of power loss due to the introduction of float were proved incorrect following conclusive research studies. Thereafter, professional cyclists quickly adopted the system, and subsequently other manufactures modified their pedal systems to include varying degrees of rotational float. Within 18 months, the incidence of knee injuries reduced significantly – and fell below previous levels associated with traditional quill-pedal and strap systems.

Most modern-day clipless pedal systems (e.g. Shimano, Time, and Look) use spring loaded devices which employ a self-centering mechanism which allows varying degrees of rotational motion (typically 4° to 8°). This type of design automatically, through spring tension, brings the shoe back to the preset neutral alignment. The Speedplay zero pedal systems offer 0° to 15° of free float rotational motion. Potentially, Speedplay offers three benefits; increased rotational float, free float (meaning the foot does not have to work against spring loaded resistance) and a very low stack height. Speedplay pedals are strongly recommended for those cyclists that have poor lower-limb biomechanics – typically leg and foot malalignment.